If you’re like me you often carry around a point-and-shoot even when you’re primarily shooting with a larger DSLR.  A lot of times it’s just there as insurance in case your big camera suddenly has problems, or is buried deep in the bag and not worth pulling out for the sake of a quick snapshot.  Or maybe you just keep your little P&S handy because you use it to shoot short video clips.  But there’s one more use that a lot of people may not think of at first – using your P&S as a handy ‘macro’ camera.

One of the nice things about the smaller sensor you get on a P&S (and the equivalently smaller lens assembly that goes with it) is that your minimum focusing distance is often drastically shorter than you’ll find on a DLSR.  Which means you can get a lot closer to your subject.  This, coupled with the deeper depth of field that comes with having a small sensor, means that you can get surprisingly good macro shots using your little point-and-shoot.

Here’s a quick comparison, shooting the cover of a book I pulled off the shelf.  Using the normal ‘walkaround’ lens I keep on my 40d – a Canon 17-85 that theoretically has some ‘macro’ capabilities – this is about as close as I can get to this book and still keep it in focus.

But using my Lumix LX3, I can get much closer.  In fact the bottom of the lens was touching the surface of the book for this shot:

And the detail’s still in there if you need it – here are direct 500×250 pixel extractions from each image so you can see exactly what you’re getting.  DSLR is on top, P&S is on the bottom.  (Both shots were hand-held, f5.6, by the way). 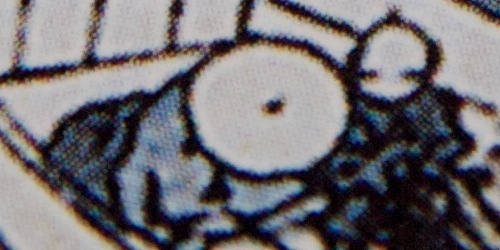 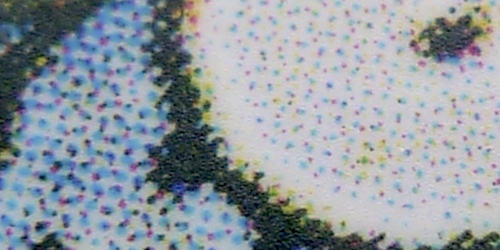 Now I’m not saying that your point-and-shoot is going to give you better results than a dedicated, expensive macro lens setup, but I would suggest that you take a minute to get familiar with the tradeoffs, so that the next time you’re out wandering around you’ll know which tool is the best/fastest/easiest/mostconvenient for the job at hand.

2 thoughts on “Point-and-Shoot as a Macro camera”